We’ve Had Enough: A Call to Action to Protect Women Human Rights Defenders & their Communities 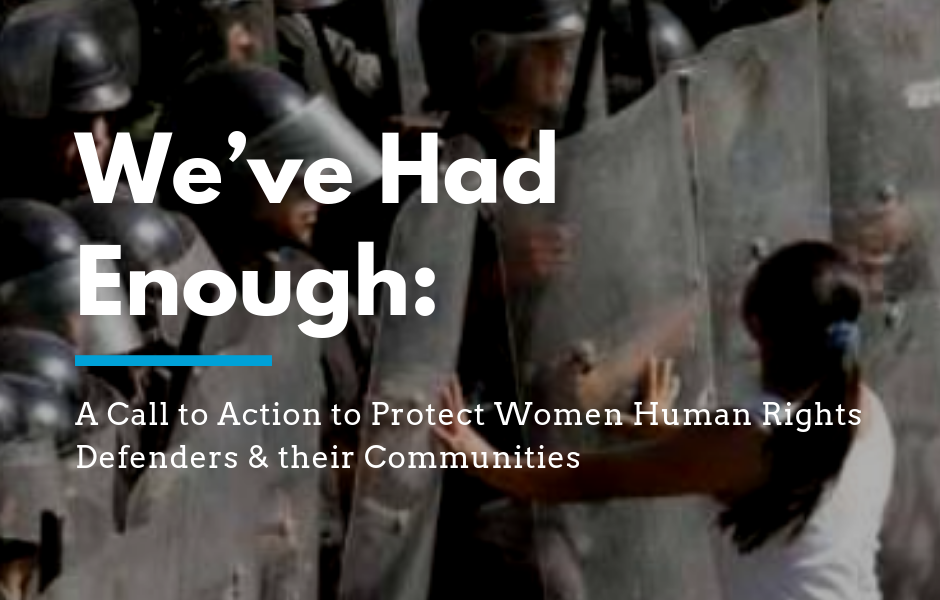 On the 20th anniversary of the UN adoption of the Declaration on Human Rights Defenders and the 5th anniversary of the UN Resolution on the Protection of Women Defenders, we -women human rights defenders (WHRDs) from 19 countries around the world who gathered together during the 22nd sessions of the UN Working Group on discrimination against women – demand an end to the violence and discrimination that continue to put our lives, our rights and our indispensable work for justice and equality at risk.

In the 20 years since the Declaration on Human Rights Defenders, we, women human rights defenders, have contributed our participation, voice, and leadership to all social movements, strengthening efforts for justice, equality, and peace around the world.

Yet, we face a climate of increasing repression, violence, and impunity despite broad State commitments to human rights resolutions and the obligation to respect and guarantee human rights without discrimination:

We Demand Respect, Safety and to be Heard

We don’t want another anniversary of the Declaration on Human Rights Defenders marked by violence, criminalization and the murder of women human rights defenders. We don’t want more speeches that are soft on the governments and private interests that are devastating our land, territories, and bodies. We demand respect, integral/ holistic security and safety, and our right to defend human rights without fear. Our legitimate voices should no longer be silenced and ignored.

To States, we demand: live up to your responsibility to guarantee all rights for all people and the freedom to exercise those rights safely; take a firm stand against all state and non-state actors who violate these rights and liberties. Cease all forms of attacks and threats against human rights defenders. Implement exhaustive, diligent, and independent investigations of the attacks against women defenders and adopt the fight against impunity as a matter of public policy.

No protection mechanism for human rights defenders will work while impunity and lack of access to justice for women, communities, and defenders are maintained, while governments continue protecting private interests, and while structural causes of violence and inequality are not eradicated.

Any policy, action, or practice that weakens or fractures the social fabric of communities and the space for citizen dissent and participation is a direct attack on the sustainability of the work led by women human rights defenders around the world.

To the United Nations and all multilateral spaces, we demand to reaffirm your commitment to peace and justice and renew your efforts to guarantee the protection and well-being of women human rights defenders. Ensure effective follow-up, implementation, and accountability to UN recommendations in collaboration with regional human rights mechanisms, and strengthen the integration of women defenders’ voices in all UN bodies and processes. In your language and actions, recognize, support, and sustain women’s integrity and agency, and demand that Member States refrain from protect private interests who violate people’s rights and liberties. Ensure that women human rights defenders who engage in good faith with the UN mechanisms and bodies can do so without fear of persecution or violence, and that any allegations or instances of reprisals are promptly investigated.

To our own movements and international human rights community we say: we must strengthen our commitment and efforts to end discrimination and violence against women defenders, even within our own ranks; prioritize alignment and support for locally-led strategies and more coordination at regional and international levels; recognize the voice and collective power of women human rights defenders and feminist perspectives; strengthen our self-protection strategies and networks; promote community-based and collective strategies that enable organizations and communities to be stronger, more resilient, more cohesive and inclusive.

It’s time to listen to women in all our diversity and heed our demands to end the racist and patriarchal system oppresses us, violates us, and excludes us; and to respect our rights and lives and the opportunity to build a better future.

← Statement of Solidarity to all detained HRDs from the HRDs World Summit 2018 in Paris
UGANDA: WHRDIC CONDEMNS ATTACKS TO WHRD ANNET NAMATA (NANA) BY POLICE OFFICIALS →