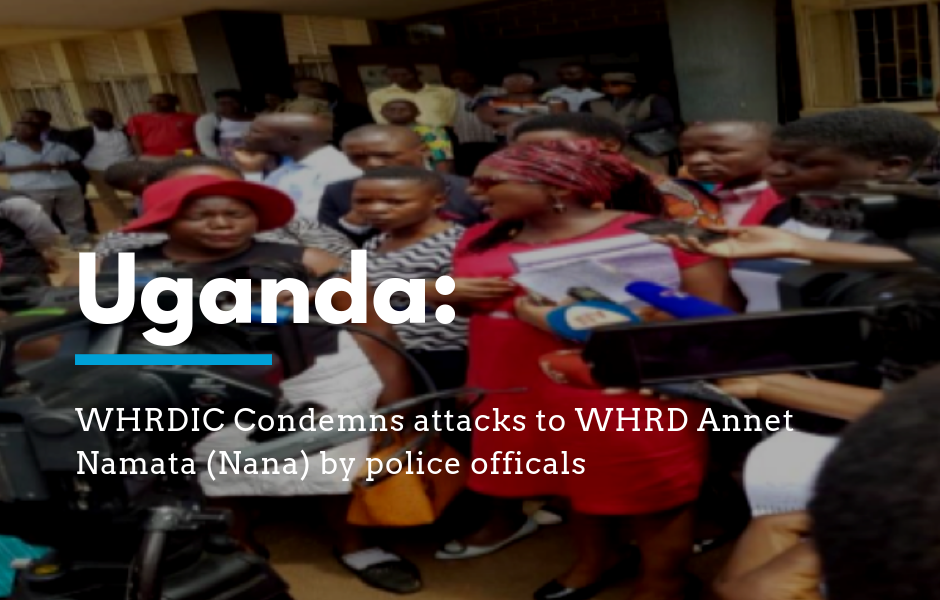 The Women Human Rights Defenders International Coalition (WHRDIC) condemns the continued attacks towards WHRD Annet Namata (Nana) by police officials and urges the Ugandan government to stop violence against her, ensure her protection and give her access to justice, as well as to protect her right to defend rights.

Annet Namata, commonly known as Nana (mother of twins), is an active human rights defender,she has defended civil and political rights in Uganda and demonstrated against the imprisonment of human rights defender and scholar Dr Stella Nyanzi, who has been detained for the last four months.

Over the past few weeks Nana has highlighted police brutality in Uganda. She also runs a Facebook account under the name “Nana Mwafrika Mbarikiwa” with more than 1000 followers. In an interview published in The Observer in Kampala on September 25, 2018, Nalongo Nana expressed fear about surveillance and threatening phone calls that she reportedly  received after speaking at a meeting convened by ACODE (Advocates Coalition for Development and Environment) in September last year.

Unfortunately on April 2019, Nana was hospitalized as a result of a violent assault by a group of police officers at the main entrance to the Uganda Police Force headquarters in Naguru, Kampala District. The human rights defender, who is seven months pregnant, was attacked while she was trying to obtain permission to organize a peaceful protest against human rights violations committed by security forces.

We note with grave concern the increasing violence and repressive context in which the defence of human rights is exercised in Uganda and where political dissent and denouncing human rights abuses and violations becomes a risk activity in itself putting in danger the lives of women human rights defenders.

We, members of the WHRDIC want to express our solidarity to Nana and to all women human rights defenders in the country who are the leading voices against authoritarianism and violence in the Country.

We urge the Government of Uganda  to: