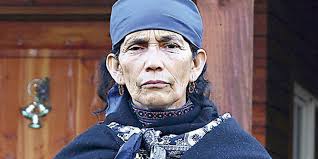 The Machi – spiritual authority- Francisca Linconao is a defender of the collective rights and ancestral territory of the Mapuche people, in the face of industrial forestry activity in the Araucanía region in Chile. Achieving the first application in the country in 2008 of ILO Convention 169 established an historic precedent when the Palermo Society Ltda. was denounced for destroying sacred places in their lof (community). Currently, her life is at extreme risk, due to the accelerated deterioration of her physical and emotional health and the lack of contact with nature and her medicinal plants, while she completes an unjust preventative detention in Temuco.

The Machi was violently detained in March, 2016, and linked to the case of arson which took the lives of the Luchsinger-Mackay couple in January, 2013. Despite having been absolved in this case at the time, today she confronts charges of terrorism, life imprisonment being requested. The accusation against her- the sole proof being testimony obtained under threat and torture- is, by any measure, illegal and a violation of the Inter-American Convention on Human Rights and ILO Convention 169. It is being sustained under the 18314 Anti-Terrorist Law, which has been widely questioned for its lack of compliance with minimum standards of due process and for violating the right to social protest.

On October 26th, after six days of house arrest, Machi Francisca was sent to prison again -and for the third time-, for being considered as a danger  to society.