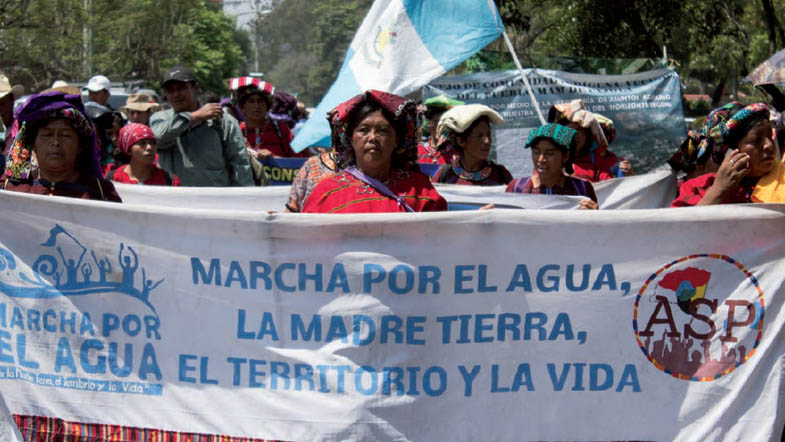 Throughout Latin America, women defenders of nature and the environment have organized themselves in diverse and creative ways to resist a hostile context of aggression and to transform an unsustainable extractive model that destroys their territories and ways of life.

Since the 1990s, Latin America has become the region that receives the highest figures of foreign direct investment for the extractive sector. In this period the extractive frontier has expanded so rapidly, generating pressure on diverse strategic ecosystems such as watershed headwaters, the Amazon jungle, moors, glaciers, high Andean lagoons, among others. In addition, along the continent large projects of road and energy infrastructure have been built. These projects are imposed in the territories of peasant communities, Afro-descendants and indigenous peoples, generating irreversible socio-environmental impacts and incurring serious human rights violations.

This model, which perpetuates historical inequalities and violence in the continent, has used strategies such as land deprivation, militarization and legislation in the service of the international financial systems. It restricts the right to participation, association, freedom of expression and protest, while allowing corruption, invasion and violent acquisition of peasant lands and ancestral territories. Faced with the legitimate resistance that comes to protect the territories, social protest has been brutally repressed, and defenders, such as Berta Cáceres, indigenous Lenca leader of Honduras, have been persecuted, criminalized and murdered. Thus, criminalization, which aims to frighten organizations and communities, to neutralize their struggles, also has specific ways of operating towards women. This phenomenon, ranging from harassment, verbal assaults, indictments and campaigns of defamation, to the legal prosecution and imprisonment seeks to delegitimize their work and punish them for questioning the established gender roles. They are singled out by presidents, corporate workers, religious fundamentalists, their community or their companions of being ‘witches’, ‘infants’, ‘bad wives’, ‘party women’ while questioning and trying to nullify their leadership.

In Ecuador, in the midst of the peaceful protest crackdown in August 2015, women from the community of were violently detained, beaten in their womb and threatened with rape. Today 5 of them  are tried and two have been sentenced to 4 years in prison. In Chile, Mapuche women, like Lonko Juana, Machi Millaray Huichalaf, political and spiritual authorities have been imprisoned, physically and sexually abused; Machi Francisca Linconao is still deprived of her liberty for a crime that she never committed, while her life and health are at risk.

Extractive projects have a specific impact on women, exacerbating violence against them and discrimination in terms of participation, access to land and health. Women defenders face specific risks, due to the magnitude of the powerful interests they confront, by questioning and destabilizing systems of oppression based on gender, race and class. For them, the spectrum of actors that can attack them is broad, as they not only confront business and state actors, but they are also vulnerable within their families, communities and organizations, when patriarchal practices naturalize violence towards them. In recent decades, there have been more than 23 feminicides of HRDs, who have raised their voices against mining projects, dams and monocultures, among others.

Sexual violence constitutes one of the main forms of violence against women and is a weapon for the dispossession of their territories. In Guatemala, in Santa Cruz Barillas and Estor-Izabal, in the context of declaration of states of siege and forced evictions respectively, indigenous women, who resisted extractive industries, were raped and sexually harassed by security agents.

However, within the framework of their work in defense of the environment and nature, women have developed various actions that have allowed the positioning of their demands and particular perspectives. In many occasions, they have been able to temporarily stop or paralyze extractive undertakings that threaten their territories as in La Puya and Santa Cruz Barillas- Guatemala, in Santa Barbara- Honduras, in Cajamarca- Peru, in Río Bueno- Chile, and Ituzaingó-Argentina, among others.

In Latin America, women´s struggles are heterogeneous depending on the local and national context and the nature of the threats they face in their territories. Women have organized autonomously, regionally, inter-ethnically; they have created organizations of environmental protection, networks and through young, feminist, antiracist, art and cultural groups. They have generated significant transformations in the personal and the collective spheres and have built new practices towards other forms of protection and integral security.

WHRDs and activists demand freedom from repression and violence, fear, land dispossession and environmental degradation. Now more than ever, they hope for inter-movements political action and international solidarity and commitment.

“Pay attention. Stand up with and for us. Our fates are connected, and what happens to us can happen to you!” – Berta Caceres, 2010.