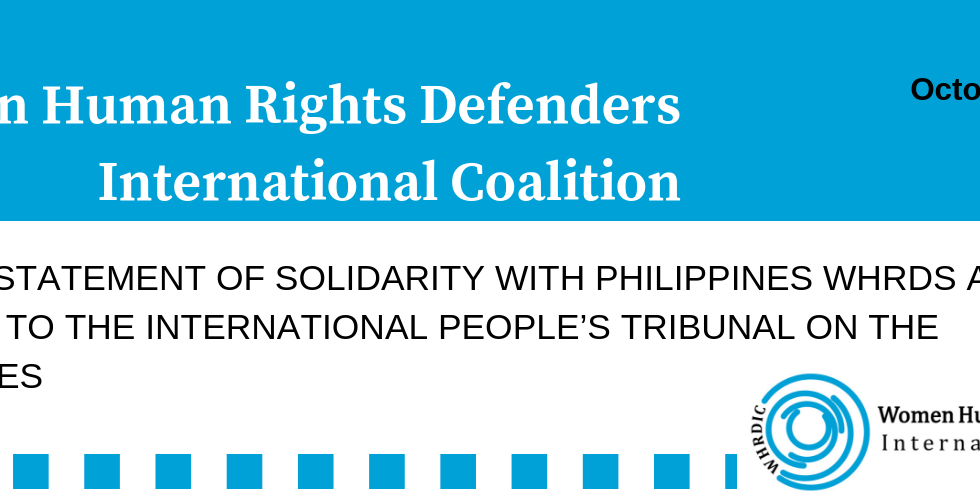 Today 28th October 2018, on the eve of the Human Rights Defenders World Summit, in Paris, France, the Women Human Rights Defenders International Coalition (WHRD-IC) express grave concern on the ongoing attacks and criminalisation of women human rights defenders in the Philippines. Recently, three women peasants – Angelife Arsenal, Morena Mendoza, and Marcelina Dumaguit – were among those killed in the gruesome October 20 massacre of nine peasants in Sagay, Negros Occidental. The WHRD-IC also condemned the current government for legitimising its actions and the culture of impunity.

The WHRD-IC is gravely concerned that President Rodrigo Duterte and his administration have normalised the discourse of sexual violence, sexism and misogyny through his actions and pronouncements against women. These actions exacerbate and perpetuate the systemic and systematic oppression and dispossession of the majority of poor and marginalised women who continue to bear the consequences of neoliberal economic policies, authoritarian rule; and perpetuating patriarchal culture in the Philippines.

Amidst this hostile social, economic and political climate, women human rights defenders (WHRDs) on the ground have persistently, relentlessly, and uncompromisingly worked for the realisation of human rights for all. Yet in the course of undertaking their legitimate work for women’s rights and human rights, the government and its agencies have listed WHRDs as enemies of the state, filed fabricated charges against WHRDs, and denied them due process. State-backed security forces are implicated in the killing of several WHRDs.

In the two years under the Duterte administration, state forces are implicated in the extrajudicial killings of at least 33 women human rights defenders. Among them are:

Targeting W/HRDs by killing and listing them as enemies of the state makes it evident that the Duterte administration is going on an all-out war against human rights defenders who dare to speak against rights violations and the prevalent culture of impunity in the Philippines. Other tactics used are the heightened vilification, defamation and criminalisation of WHRDs and other defenders in the Philippines. Aside from the extrajudicial killings of Beverly, Elisa, Carolina and Dalia, there are at least a hundred more WHRDs who face fabricated criminal charges including Hedda Calderon of Gabriela, who remain detained facing false non-bailable criminal charges. WHRDs also experience grave harassment, threats, and are labelled “enemies of the state.” The government’s actions against human rights defenders hinders and delegitimises their work to defend women’s and human rights.

WHRD-IC also issues this statement to acknowledge the voices of Filipino W/HRDs who took part in the International People’s Tribunal on the Philippines (IPT), held last month 18-19 September 2018 in Brussels, Belgium. The IPT is a civil society-led process that arises in recognition of the lack of domestic remedies for the gross human rights violations taking place in the country and demonstrates the persistence, courage and strength of W/HRDs from the Philippines in seeking accountability through international solidarity.

The IPT for the Philippines resulted in a strong verdict where jurors found Presidents Rodrigo Duterte and Donald Trump along with their cohort of corporations and international financial institutions guilty of crimes against the Filipino people. This was acknowledged in a verdict that accepted the indictment of the Duterte and Trump administrations under three broad charges: violations of civil and political rights; violations of economic, social and cultural rights; and violations of national sovereignty, right to development, and international humanitarian law.

The WHRD-IC recognises that the verdict of the IPT consolidates the range of human rights violations taking place under the Duterte government with direct and indirect support of the US government. The Coalition voices its solidarity with the W/HRDs in the Philippines, whose testimonies in the tribunal demonstrated the deeply gendered aspect of Duterte’s attack on human rights.

The WHRD-IC together with the international HRD community present in Paris for the Human Rights Defenders World Summit, marking the 20th anniversary of the Declaration on human rights defenders, calls on the Duterte government to:

← Saudi Arabia: WHRDIC together with over 160 groups call for accountability following murder of journalist and widespread arrest of women’s rights defenders
Statement of Solidarity to all detained HRDs from the HRDs World Summit 2018 in Paris →