An Open Letter Regarding Human Rights Violations against WHRDs MENA 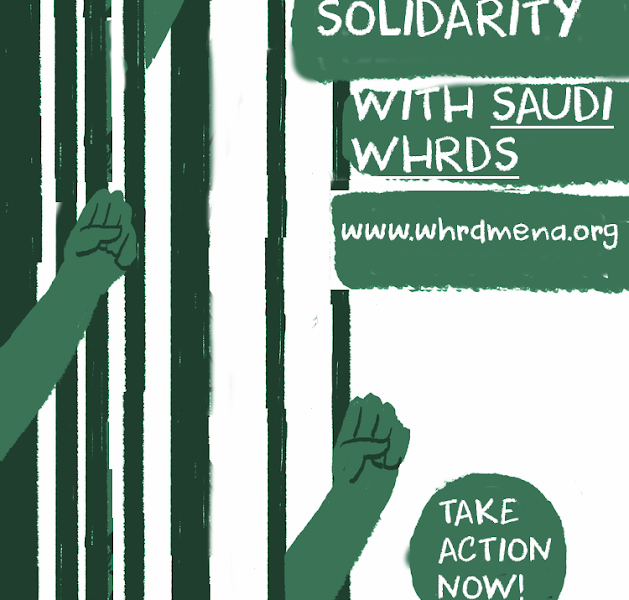 An Open Letter from Feminist & Human Rights Organizations and Human Rights Defenders Regarding Human Rights Violations against Women in The Arab World and Greater Morocco.

We, the undersigned, women human rights organizations, activists and human right defenders from the Arab region and Maghreb, would like to express our concern and fear over the recent crackdown in Saudi Arabia and Egypt. In Saudi Arabia, women human rights defenders who were arrested on 15 May 2018 are still behind bars, without trial and with no legal grounds for their detention. In Egypt, women human rights defenders continue to be harassed legally and judicially, which includes periodic summons. The authorities continue to extend the detention of woman human rights defender Amal Fathy for speaking out against harassment.Since 15 May 2018, Saudi authorities have arrested at least 12 women human rights defenders (WHRDs) whose work focuses prominently on reclaiming women’s right to drive, advocating for the end of the discriminatory male guardianship system and demanding the protection of women from all forms of violence. The WHRDs were arrested a few weeks before the lifting of the driving ban which took place on 24 June. Some of the detained WHRDs have been identified as: Loujain Al Hathloul, Eman Al-Nafjan, Aziza Al-Yousef, Nouf Abdul Aziz, Mayaa Al-Zahrani and recently Hatton Al-Fassi.
Following the arrests, Saudi authorities, government-aligned media, and troll accounts on social media launched a public smear campaign and labelled the WHRDs as ‘traitors’ and a ‘danger to Saudi society and national security’. This created an environment where people became fearful to express any views which may be considered to be contrary to the state, thereby having the effect of silencing people.
In Egypt, the Egyptian authorities arrested WHRD Amal Fathy on May 11 for speaking out against sexual harassment and the government’s failure to protect women in a video she published on her Facebook account. Authorities continue to extend her detention. On 15 July, authorities condemned her to another 15 days of detention.
On 27 May, the investigative magistrate in case 173, known as the ‘foreign funding case’, summoned Drs. Suzan Fayad and Magda Adly, founders of El Nadim Center. Magda Adly was released on a 20,000 Egyptian pound bail. On 16 July, Egyptian authorities summoned WHRD, Mozn Hassan, founder and executive director of Nazra for Feminist Studies, who was later released on a 30,000 Egyptian Pound bail. It is worth mentioning that Hassan and WHRD Azza Soliman are under a government-imposed travel ban and have their assets frozen.
This year marks the 20th anniversary of the adoption of the Declaration of Human Rights Defenders, as well as the 70th anniversary of the Universal Declaration of Human Rights and 25th anniversary of the founding of the Office of the United Nations High Commissioner for Human Rights. Full and equal respect for human rights is an integral part of the goals that are being pursued and called for by women human rights defenders in the Middle East and North Africa. Both Saudi Arabia and Egypt have ratified the Convention on the Elimination of Discrimination against women and girls (CEDAW) and are members of the UN Human Rights Council and as such have a responsibility to uphold human rights and create an environment which is free from discrimination. We therefore hope to draw your attention to the fact that many governments in the region continue to fail to undertake their international commitments in ensuring respect for and the protection of human rights and fundamental freedoms.
It is clear that the context of violations of human rights defenders in the region is another manifestation of violence against women in general and poses additional risks to WHRDs who are increasingly playing a prominent and noticeable role within different social movements and on the front lines of the struggle for justice and freedom. Women human rights defenders in the region work in a misogynist and patriarchal context. This is clearly demonstrated by the increasing rates of violence against women, the killing of women and the undermining of their agency.

In January 2018, Sudanese authorities detained more than 20 women human rights defenders arbitrarily for their participation in peaceful protests. In addition, the Sudanese authorities have defamed some women human rights defenders by using public order laws; a patriarchal regulation system aimed at restricting the women’s movement in the country, under which they have accused WHRDs of ‘immorality’.

In February 2018, WHRD and lawyer Riham Al-Bader was assassinated during her practice of humanitarian and human rights work in Yemen.

Recently, threats and intimidation acts have increased in Saudi Arabia and Egypt following the chilling smearing campaign aimed at erasing the work undertaken by women human rights defenders and have highlighted that they are simply ‘women’- meaning ‘irrelevant’. This demonstrates the use of a patriarchal discourse that contradicts the vital role that WHRDs have played in order to improve society as a whole, but also for women who continue to be discriminated against and constitute the majority of victims of various forms of violence.

We therefore respectfully ask that you, as Special Rapporteurs and Chairpersons of the expert Working Groups to:

– Condemn the continued repression of fundamental freedoms by the Saudi and Egyptian authorities, support and protect democratic values in line with your mandates’ aspirations, intervene with the authorities to demand the immediate and unconditional release of all detained human rights defenders, including Loujain Al-Hathloul, , Hatoon al-Fassi, Nouf Abdul Aziz, Mayaaa al-Zahrani and Amal Fathy; and to demand the end of the crackdown against WHRDs, as well as all forms of harassment against WHRDs in Saudi Arabia and Egypt.

-To emphasize the right of everyone to promote and protect human rights without fear of retaliation and to pressure all States in MENA to take the necessary measures to guarantee the rights and safety of all women human rights defenders, especially those exercising their right to freedom of opinion and expression, peaceful assembly and association.
-To strongly denounce the violent systemic targeting , criminalization, intimidation, torture, forced disappearance and assassinations of women human rights defenders in the Middle East and North Africa.
-To condemn all acts of intimidation and reprisals committed by governmental and non-governmental entities against women human rights defenders who cooperate with regional and international bodies, including the United Nations and its mechanisms.
– To call on the MENA states to take concrete steps to stop violations against WHRDs and to encourage in this regard the immediate and unconditional release of WHRDs who are imprisoned for defending human rights and fundamental freedoms.
– Request to visit Egypt and Saudi Arabia to investigate the situation of women human rights defenders directly and issue a report on the violation of their rights and freedoms.