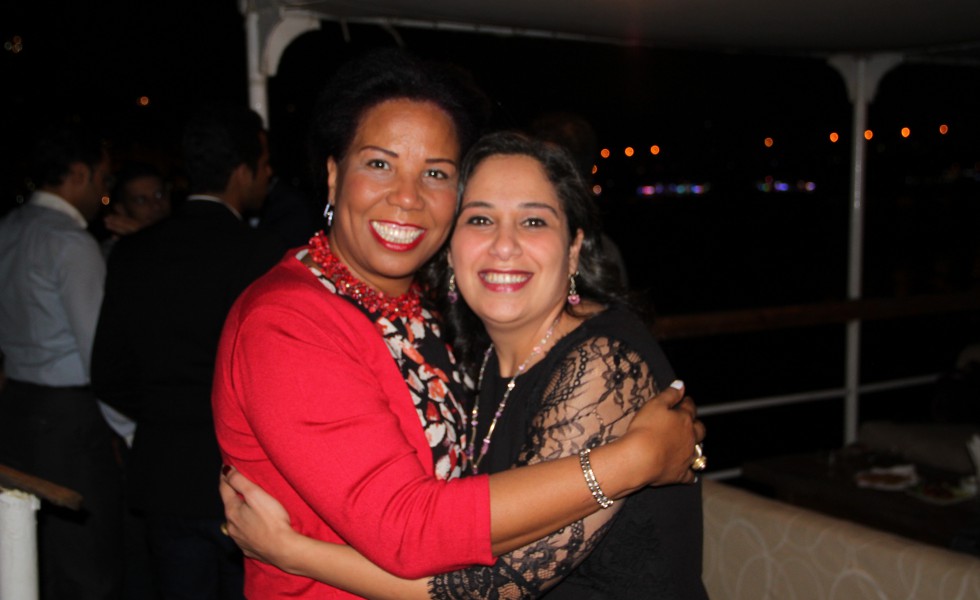 Hunting out Feminists in Egypt: Azza Soliman and Mozn Hassan Embody the State’s Refusal of Feminist Activism in both Private and Public Spheres

The targeting by the government of Azza Soliman and Mozn Hassan also attempts to further destabilize other WHRDs dismantling patriarchy and fighting for rights in Egypt. It attempts to deliberately discourage women from dreaming and collectively taking action for just and equal societies. Taking into account both Azza Soliman’s and Mozn Hassan’s regional work, such attacks also attempt to hamper regional collaboration among WHRDs. Needless to say, such attempts will inevitably fail, and feminist movements and WHRDs in Egypt and the region will continue to thrive. Recent events in Egypt have made it clear that the Egyptian state seems determined to close down the civic space of feminists – and indeed, others – who work on critical issues such as violence against women (VAW) in both private and public spheres. While civil society has been directly targeted by agents of the state, including police and courts, women and feminist activists are very much under fire. Egyptian feminists and women human rights defenders (WHRDs) Azza Soliman and Mozn Hassan have had a taste of all the patriarchal weapons the state can muster to stifle their activism, which are typical of the tools normally used by both state (and sometimes non-state) actors against WHRDs under repressive governments. Despite the pivotal work they conduct for combating VAW and other human rights violations, and despite the support services they have been providing survivors with for years, they are described as spies, persons who “harm national security” and those who incite “irresponsible liberation” of women. Both women are included in “Case 173” also known as the “NGO Foreign Funding Case”. The former description references some of the charges used against them –  which include life imprisonment. While that risk hangs over their heads, they are banned from travel. Soliman’s assets and those of her law firm have been frozen. Deliberations about freezing Hassan’s assets as well as those of Nazra for Feminist Studies (an NGO where she is the Director) have been underway, and a verdict is expected 11 January 2017. Freezing assets of individuals generally strips them of their resources and the ability to sustain themselves on a daily basis.

Azza Soliman is a prominent Egyptian WHRD[1], lawyer and feminist who has been working for more than 25 years on women’s rights in the private sphere and their access to justice. Her work addresses the fact that many women and people in marginalized groups in Egypt are severely deprived from their basic rights in laws and practice. She works to enhance accountability for VAW and was the first to propose a civil law governing the right to divorce, inheritance and custody among other rights for both Muslims and Christians, and the Nationality Law for Egyptian women married to non-Egyptians. Also, Soliman worked on combating corruption, through including women in political decision making processes and positions in public, academia, and business sectors. She has also challenged the Egyptian government in Egyptian courts through using the Convention on the Elimination of all Form of Discrimination Against Women (CEDAW) and other international conventions.

Soliman was the first to break the silence on various societal taboos such as incest, martial rape, and human trafficking in women, in relation to marriage. In 1995, she founded Center for Egyptian Women’s Legal Assistance (CEWLA) and is now the head of its Board of Trustees. CEWLA is located in the slum area of Bulaq Al-Daqrour and subsequently serves many of the most economically and politically marginalized women in the Egyptian judicial system. Soliman is one of the founders of the international Musawah movement, which develops progressive interpretations in the Islamic Shar’ia law related to the family and women’s rights. A consultant for various UN agencies in the Arab region, she is a board member of Sisters In Islam which works to empower women for change in the Arab region and is also an advisor for the Middle East and North Africa Women Human Rights Defenders Coalition.

Mozn Hassan is a feminist and WHRD who founded Nazra for Feminist Studies in 2005, and has documented human rights violations and coordinated the response to the alarming number of sexual assaults on women participating in public protests during and after the Egyptian revolution of 2011. Her work and that of Nazra ensured that survivors received medical, psychological and legal support. Hassan and Nazra engaged in coalitions of women’s groups that successfully lobbied for the inclusion of women’s rights in Egypt’s 2014 Constitution and ensured the passage of amendments to the Egyptian Penal Code to include sexual harassment and expand the definition of sexually violent crimes. Believing that feminism and gender are political and social issues affecting freedom and development in all societies, Hassan and Nazra mentor young women in politics, including encouraging candidates for parliamentary, municipal and union elections from across Egypt’s political spectrum. Despite being targeted by the state, she is recognized globally for her advocacy and role in feminist struggles.  She is a board member at Global Fund for Women, and was a member of the International Planning Committee for the Association for Women’s Rights in Development (AWID) 13th Forum, in addition to being a Regional Consultant to the WHRD Coalition in the Middle East and North Africa (MENA). Hassan received both the Charlotte Bunch Award for Human Rights Defenders in 2013 and the Right Livelihood Award in 2016, the latter of which is commonly known as the “Alternative Nobel Prize”.

Soliman and Hassan have been targeted in the current context of escalated attacks on civil society and human rights organizations in Egypt. The tactics used by the government against them are paralleled by those used against others: there is currently a closure order issued, for the renowned El Nadeem Center for the Treatment and Rehabilitation of Victims of Violence and Torture, and the re-opening of the case no. 173 for 2011 known as the “NGO Foreign Funding Case”, which includes the assets freeze of Founder and Executive Director of the Cairo Institute for Human Rights Studies (CIHRS), his family and others. Moreover, 3 Nazra for Feminist Studies staff members were officially summoned before the investigative judge on 22 March 2016 followed by that of Hassan on 29 March 2016. A travel ban has been put in place for Mohamed Zaree, the Egypt Office Director of CIHRS.

The imposition of a travel ban on Soliman, along with the freeze of her personal assets and those of her private law firm came without an official verdict, which is also alarming, if not illegal. These were preceded by her arrest on 7 December 2016 and her release through bail amounting to EGP 20,000 (which currently equates to 1,112.32 USD- bearing the float of the Egyptian Pound), which is a high amount and was never used in other recent incidents. Furthermore, a request was made by the investigative judge to freeze the assets of Hassan and that of Nazra for Feminist Studies. This crackdown is negatively crowned with the parliament’s passing on 20 November 2016 of an unprecedented NGO Law that would completely annihilate civil society in Egypt[2].

Punishing two respected feminist advocates  with being potentially sentenced to life imprisonment is baffling both because of their human rights work, and because these threats are orchestrated by a government that seemingly prioritizes women’s human rights, including through proudly asserting its strong intention to combat VAW. This issue was highlighted by feminists during the time of the mob-sexual assaults and gang rapes between 2012 and 2014, when the government, political parties and other similar groups remained notably silent.

The targeting by the government of Azza Soliman and Mozn Hassan also attempts to further destabilize other WHRDs dismantling patriarchy and fighting for rights in Egypt. It attempts to deliberately discourage women from dreaming and collectively taking action for just and equal societies. Taking into account both Azza Soliman’s and Mozn Hassan’s regional work, such attacks also attempt to hamper regional collaboration among WHRDs[3]. Needless to say, such attempts will inevitably fail, and feminist movements and WHRDs in Egypt and the region will continue to thrive. Also, it is important to note that the escalation in the measures taken against Soliman and Hassan is more severe than that directed to other human rights defenders in the same case (Case 173), likely signifying an intensity due to the fact that they are women and feminists.

In fact, the vision and advocacy of these two feminists, along with others representing different generations of the Egyptian feminist movement paved the way for legislation and measures to be taken towards this issue. However, it is clear that both Soliman and Hassan are seen by the government to have “crossed the line” since they defy the patriarchal norms that are enshrined and upheld by the state and society. These women human rights defenders speak loudly and clearly about VAW taking place in homes, perpetrated by family members, at the hands of state actors, and in the streets- streets that in the eyes of the state, fall within the territory of the state, and subsequently, have stripped the state from its long coercion of assuming the role of “women’s protection” on their own terms, while feminists challenge and defy patriarchy, change attitudes and societies – hence the “irresponsible liberation”, of which Hassan is accused.

The Egyptian state cannot be allowed to stifle Hassan and Soliman’s activism. The government cannot co-opt the feminist movement as many say it did in the 1950s. If it were to succeed, the discourse on women’s human rights and women’s rights to bodily integrity will  be a conservative one that ensures no rights whatsoever for women in a country with a defective civic space, and silence on these issues will prevail, where the state supported media perfectly tailored a discourse, or rather a smear campaign, that enables non-state actors to conduct a witch hunt for feminists of the like of Soliman and Hassan.

In fact, feminist activism, especially when it addresses issues as sensitive as those courageously tackled by Soliman and Hassan, is not only targeted by the state, but also by large segments of society. Working on sexual violence in the public and private spheres, as well as on political rights of women, or reforming the personal status law, does not merely challenge the state. In addition, because patriarchy is not only present at the structural state level, and because it is rather a very diffuse form of power, this kind of work is also challenged and negated by many other societal actors, including people in family and community structures, school systems, in law, in media and in religious institutions, to name just a few. Hence, state targeting of feminists is a way of stigmatizing them in their societies in ways that appeal to those who would rather believe fabricated and  trumped-up charges than truly rethink the patriarchal norms that feminists challenge. This way in which feminists remain stuck between and antagonized by both state and other societal actors,supports the idea that WHRDs face a range of different violations and challenges because of sexism and misogyny, and different and additional tools of targeting and stigmatization than male human rights defenders do.

These roles of gender-related oppression must be explored, particularly in cases such as those of Hassan and Soliman. Mozn Hassan and Azza Soliman have been engaging in extraordinary defense of rights for decades. They must not continue to be punished by the Egyptian government for this feminist work, and they must not be used as high profile “sacrificial lambs” in state efforts to close down civil society organizing.

[2] Please read: “Egypt: A Letter and legal memorandum to the President, demanding the repeal of the NGO Law”: http://www.cihrs.org/?p=19328&lang=en

[3]Please read Zeina al Gazhar on regional collaboration among WHRDs in the MENA on Open Democracy published on 29 November 2016 https://www.opendemocracy.net/zeina-al-aghar/on-international-day-for-women-human-rights-defenders-building-bridges-of-solidarity-