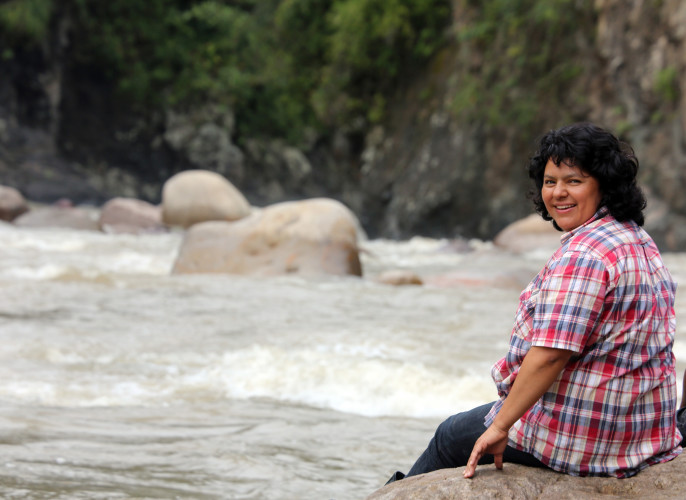 Berta Isabel Cáceres Flores was a Woman Human Rights Defender (WHRD) and prominent Lenca indigenous and feminist activist in Honduras. In the morning of March 3rd, 2016, Berta Cáceres was murdered in her sleep, in her home in Intibucá, Honduras.

Ms. Cáceres was the General Coordinator of the Civic Council of Popular and Indigenous Organisations of Honduras (COPINH) and a member of Honduras’ National Network of Women Human Rights Defenders. Berta led the struggle for the rights of the Lenca indigenous peoples and against the construction of a hydroelectric project, Agua Zarca, by the Honduran company Desarrollos Energéticos S.A. (DESA). The regional Central American Bank for Economic Integration (CABEI), the Dutch development bank FMO and Finnfund from Finland finance the project and Voith-Hydro (Siemens) supply the project’s equipment. Following this and other murders and violent attacks, FMO and Finnfund have announced their intention to withdraw from Agua Zarca project.

This political assassination is intended to silence the people’s opposition to a destructive and profit-driven model of development that has been violently imposed by corporate and state authorities. Berta was murdered because she confronted the country’s economic and political elites in the struggle for life, justice and the environment. She was constantly attacked due to her human rights work and also for being an indigenous woman.

Berta’s life was in grave danger for a long time and she has received countless death threats. She was subjected to attacks, threats and sexual harassment from people associated with DESA as well as arbitrary arrests and criminalization by Honduran State officers and entities. For this reason, Berta was granted precautionary protection measures by the Inter-American Commission of Human Rights (IACHR) in 2009.

The WHRDIC warns that Berta’s assassination is symptomatic of the global backlash against WHRDs. Struggles for land and territory entail particular risks due to confronting powerful corporate actors. Indigenous women worldwide lead struggles to protect their territories and to counter the exploitation and abuse of people and nature. They confront “profit over people” paradigms as well as ingrained social structures of patriarchy and white supremacy.

When women take leadership, they challenge gender norms and often contest the patriarchal culture perpetuated by communities, states and corporations. As a result, WHRDs are subjected to gender-specific and sexual violence and intimidation. Threats against their families and loved ones are intended to force them to abandon their critical work for rights and justice.

With lethal violence is on the rise worldwide, states have the responsibility to act for the gender-specific integrated security and safety of WHRDs.  States have the opportunity today to express true commitment to WHRDs in two key processes in the United Nations. Member States of the United Nations can endorse and fulfil their obligations on protection measures, currently debated in the Commission on the Status of Women (CSW) and negotiated at the 31st Session of the Human Rights Council around the Resolution on Human Rights Defenders.

The WHRD IC reiterates that protection measures for Human Rights Defenders cannot be detached from gender-specific analysis, informed by an intersectional framework of race, ethnicity, class and sexual identity.

We celebrate the clarity and coherence of Berta’s voice and political action; her enormous generosity towards people and nature; her rebellious integrity to resist powerful institutions and the profit-driven, patriarchal and racist ideologies that justify them. We stand together in creating alternatives to global systems of economic and patriarchal domination and exploitation of human lives and natural resources. In the spirit of feminist solidarity, we reaffirm our commitment to Berta’s vision that ties together human life, social equality and environmental justice.

We Call on the Government of Honduras

We Call on DESA, FMO and Finnfund

We Call on the Governments of the Netherlands and of Finland

← UN EVENT CALLS FOR PROTECTION AND PARTICIPATION OF WOMEN HUMAN RIGHTS DEFENDERS IN THE IMPLEMENTATION OF AGENDA 2030
Statement in solidarity with non-violent protestors in Kidapawan City, Philippines →