Wu Rongrong, one of the Chinese Feminist Five has talked about her suffering during the police interrogation and her detention. 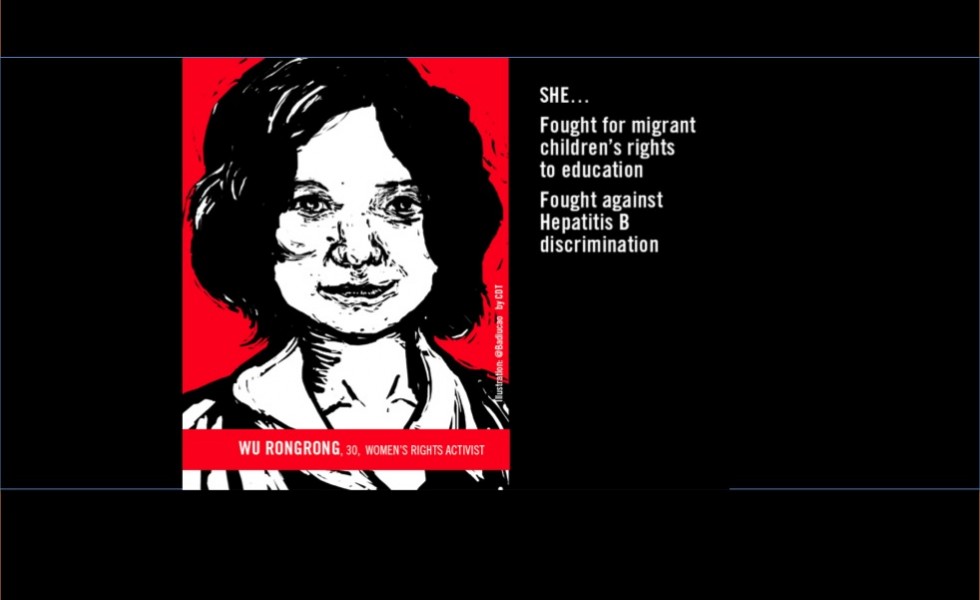 The author of this article prefers to remain anonymous.

Recently, I was blessed to meet up with Wu Rongrong, one of the “Feminist Five” in Hangzhou, China. On April 13, Ms. Wu was sent back to Hangzhou by Beijing police under the condition of “on bail awaiting trial”. I organized her own narratives about what she has gone through into this article.

There will be sub-sectional titles with question marks below. That’s because the article is written based on Ms. Wu’s own narratives only. I do believe Ms. Wu was telling the truth, but since I did not interview the police, I use the question marks here to demonstrate certain objectivity for the article here as it is based on Ms. Wu’s unilateral story. Such a question mark could be also considered as a form of “procedural justice” in writing and reporting.

The Crashing down of A Wonderful Plan
Ms. Wu told me the details of their wonderful activity plan – the performance art with the theme on “Anti-Sexual Harassment” on March 7. They had prepared the stickers sent out to the pedestrians writing “Prevention of Sexual Harassment, Safety made by Everyone of Us,” “When you are sexually harassed, don’t be afraid and ask the police for help immediately.”

“But we were not able to make it eventually. At around 2:00pm on March 7, I was taken away by the police in Xiaoshan Airport. At 11:00am the next morning, I was taken to Beijing and had detained in the Haidian Detention Center ever since then.” Ms. Wu told me, “As a matter of fact, on the morning of March 06, I got the call from the Guobao in Hangzhou (the policemen from the Department of State Security). They asked me to stop the activity and I actually agreed to do that at that moment.”Ms. Wu believed that she was detained by the police due to their activity plan on March 07.

“Occupy Men’s Room” – the Old Activity Two Years ago Becoming the New Charge?
Ms. Wu said “in fact, our March 7 plan has never been carried out. There is no reason for my detention. This detention is unlawful. After the police held me in control, they changed their indictment against me about the performance art – “Occupy Men’s Room” two years ago.” Ms. Wu is furious about Beijing police’ actions – “detaining someone based on some reason first and then changing it to another reason after the detention.”

According to Ms. Wu, “Occupy Men’s Room” in the early spring of 2012 was the performance art conducted by feminist activists in Beijing and Guangzhou. Their activity did not really take over the men’s room, but took the form of performance art demonstrating their concerns for the disproportional ratio of women’s and men’s rooms. They aimed to solve the social issue that women have always had to wait for a long time in a long line for using the public bathrooms.

The activity was actually conducted in this way. They found a public bathroom, firstly explained to the men who were going to use the bathroom about their activity and only after they got the consent from those men did they symbolically “occupy” the men’s room for 10 minutes (and let the women who were waiting for a long line for the women’s room next to use the men’s room instead). They also held a sign writing “Protection of Women’s Rights” outside of the public bathrooms. And that’s it.

In fact, when searching online, it could be seen that there were a lot of positive media comments on this performance art. But now, Ms. Wu said with indignation, “the police mainly interrogated me because of this activity I participated into three years ago. This activity ridiculously became the charge against me for ‘picking quarrels and provoking a disturbance’!”

Humiliated, Threatened and Insulted during Interrogation in Detention Center?
“I was humiliated the moment I was thrown into the detention center. They would not let me sleep on a bed. I was made to sleep on the floor even though I saw empty bunks. They wouldn’t allow me to sleep on the bed because I have hepatitis B,” said Ms. Wu. “Also, many of the interrogations were made at night. I was only allowed to return when most of my cellmates were already long asleep. Interrogation under fatigue exacerbated my liver condition.”

Ms. Wu also told the author that “they [the police] would often threaten me right before they started the inquisition record (written and simultaneous video recordings). They would yell at me ‘we will tie you up and throw you into the men’s cells, and let them gang rape you.’ Or they would say things like ‘you have a 4-year-old son, right? Seems like he’s going to have some trouble in his future education and work.’ Threats like those would always proceed their recorded inquisition.”

Moreover, Ms. Wu also said. “while in the detention center, a man in police uniform would come to me out of nowhere and verbally insult me out of no reason. I have no idea who he is, but suspect that he was doing so under specific police order. This is implicit in his loud humiliating words, like, ‘you are a scum. The scums like you poison girls’ minds nowadays. Men used to enjoy polygamy with multiple wives and concubines but no longer can. Now we are all suffering tremendously because of you.'”

ID was “made lost” by the police?
Ms Wu said, “after the 37-day detention, the prosecutor denied the arrest and therefore the police had to release me under the condition of “on bail awaiting trial”. However, when I was getting ready to go back to Hangzhou, The police officer Zhu Jihua told me that they lost my ID, which they took from me (they confiscated my ID during my detention). So now, they can’t give me back my ID.”

Ms Wu is very sad. She said, “without ID, my life becomes very inconvenient. The procedure of applying for a new one is very troublesome. I need to go back to my hometown in Shanxi, and it will cost me several thousands of RMB. As a social worker with low incomes, this is simply too much for me.”

More about the feminist five: