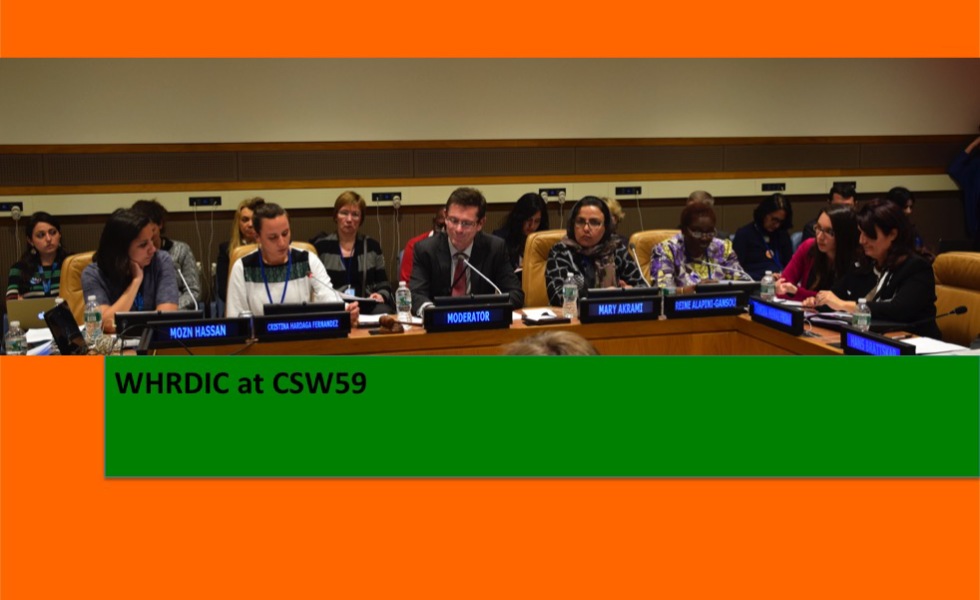 (New York, 9 March 2015) International Women’s Day was marked today by two United Nations events in New York and Geneva highlighting the ongoing threats, risks and attacks against women human rights defenders, despite the existing State obligations to ensure their protection and to create an enabling environment for their work.

Opening the event in New York, Mr. Ivan Šimonović , United Nations Assistant Secretary-General for Human Rights, spoke to the UN General Assembly resolution of 2013 on the protection of women human rights defenders. ‘The resolution provides an inclusive characterization of women human rights defenders’ he said, ‘and outlines a range of steps that States should take to ensure the protection of all women defenders.’

Mr. Hans Brattskar, State Secretary of Norway, stressed that the General Assembly resolution was a step in the right direction, but that much more is needed to implement it in practice, including by addressing reprisals against WHRDs.

Ms. Samira Merai Friaa, Minister of Women, Family and Children for Tunisia, agreed that implementation is key. ‘ We must recognise and foster the important work of WHRDs, whose role it is to raise critical human rights issues,’ she said. ‘WHRDs have a key role in advancing women’s rights, including in the face of extremist ideologies.’

Civil society panellists from Afghanistan, Egypt and Mexico outlined the experiences of women human rights defenders in their respective countries and regions. They highlighted challenges they face in their everyday lives, such as threats and attacks from State and non-State actors including from family and community members. These violations are frequently gender-specific, including attacks on their reputation designed to stigmatise and undermine their work. All too often the perpetrators of such threats and attacks are not brought to justice.

Mary Akrami from the Afghan Women’s Network stressed the essential role of women in peace processes. ‘Women and women human rights defenders need support to protect them from threats and attacks from both State and non-State actors,’ she said. ‘Protection cannot remain on paper. We need real, practical implementation. We are in a very sensitive time. We need everyone’s resolve and solidarity’, urged Ms Akrami.

Speaking to the obligations of States, Cristina Hardaga from Just Associates (JASS) referred to consultations held in the Mesoamerican region on effective protection mechanisms. ‘The General Assembly resolution is a key tool that women human rights defenders should use to hold governments to account,’ she urged. Highlighting the ever-shrinking space for civil society, she noted ‘Access to funds for grassroots women human rights defenders is limited, and the gap in regular communication between civil society and governments creates a lack of trust that needs to be addressed.’

Mozn Hassan from Nazra for Feminist Studies also highlighted the need for establishing networks amongst activists. ‘We have recently formed a coalition of women defenders in the Middle East and North Africa, to give a voice to the women in the region,’ adding that ‘Such cooperation amongst defenders is needed to counter the majority narrative on women in public space, which is so frequently restricted.’

‘Regional mechanisms can also play an important role in protecting WHRDs,’ added Commissioner Reine Alapini Gansou, Special Rapporteur on Human Rights Defenders of the African Commission on Human and Peoples’ Rights. Outlining the recommendations of the first ever Commission report on the situation of women defenders across the continent, she said: ‘States to put in place a national mechanism on the ground for the protection of women defenders , and implement laws for their protection and fight impunity’.

Participants at the event, including from the WHRD International Coalition, expressed their disappointment that the political declaration adopted by the CSW earlier that day did not explicitly refer to women human rights defenders.

Highlighting the recent OHCHR #reflect2protect campaign, a short clip was shown from the campaign’s video series featuring women human rights defenders from around the world. In it, the High Commissioner for Human Rights states that ‘real change does not happen unless women and men fight for these rights – and at the forefront of this fight are women human rights defenders’.

The Commission on the Status of Women, meeting from 9-20 March 2015 in New York, is the principle global policy-making body dedicated to gender equality and the advancement of women. The theme of the 59th session focuses on the implementation of the Beijing Declaration and Platform for Action, twenty years after its adoption.

The Office of the High Commissioner on Human Rights (OHCHR) launched a campaign on 10 December 2014 called #reflect2protect, focusing on the work of women human rights defenders and their specific protection needs.