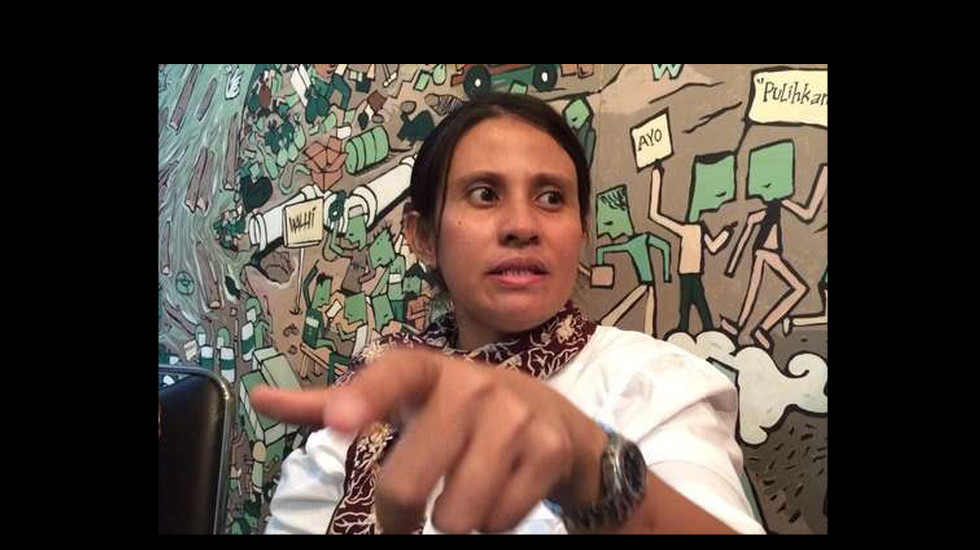 On the eve of International Human Rights Day (Dec.10) and during the global campaign for 16 Days of Activism, newly-elected Indonesian President Jokowi Widodo announced that he would give imprisoned land rights activist, Eva Bande,presidential pardon. Eva, a member of the JASS-inspired youth organization, FAMM-Indonesia, was imprisoned on and off since 2011 for peacefully organizing against national palm oil corporations’ extractive projects which were exploiting resources and displacing her community. FAMM-Indonesia and dozens of women’s rights organizations across Indonesia and Southeast Asia mobilized global support by leading social media campaigns, online petitions and solidarity marches to pressure the government to release Eva. “This is a source of strength for us. Our struggles, our months and years of campaigning for Eva Bande’s release finally paid off,” says Niken Lestari, national coordinator of FAMM-Indonesia. Eva was released on Dec. 19 and held a press conference on Dec. 20, “I am a local activist [working on] local issues. Granting a pardon [does not stop] cases of land conflicts in the region. The farmers are still struggling.”

Who is Eva Bande?

Eva Bande has been organizing against land grabs by corporations for years. Working alongside farmers and indigenous peoples, she led the fight against companies—PT Kurnia Luwuk Sejati (KLS) and PT Berkat Hutan Pusaka (BHP)—who were converting cacao land plantations into palm oil plantations in Sulawesi (an island in Indonesia). Despite the local government’s allocation of reforestation funds for these cacao lands, the KLS and BHP began seizing these lands by closing and destroying roads leading to the cacao plantations—eventually displacing the cacao farmers.

On May 26, 2011, Eva and hundreds of farmers led protests against KLS and BHP and demanded the repair of the damaged roads. When Eva tried to ease the escalating tensions, she was arrested for allegedly inciting people to act violently, which was not the case.

Fast forward to May 15, 2014. Eva who has been on parole for three years since 2011 was rearrested, along with two farmer leaders. In her seven months in jail, FAMM-Indonesia (or Young Indonesian Women Activists’ Forum) led local, regional and international campaigns to release Eva from prison on the ground that she was wrongly accused.
Criminalizing Activists Is a Trend

Elsewhere in Southeast Asia, women activists have had similar experiences. In Cambodia, Thailand and thePhilippines, hundreds of women are serving jail terms for protecting their territories against land grabs. Local and multinational companies are embarking on large-scale development projects, which not only displace people but also destroy the environment. Local governments often work hand-in-hand with these companies to exploit resources in the name of job creation and “development.”

In November, Kong Channtha, along with six other land rights activists from the Boeung Kak Lake community were arrested for blocking a road in Phnom Penh in a demonstration demanding respect for their land rights. Two pregnant peasant activists from the Philippines—Andrea Rosal and Maria Miradel Torres—were locked up for allegedly taking part in criminal activities. Both women were denied immediate medical attention which led to thedeath of Andrea’s two-day-old daughter and to Maria Miradel’s induced abortion.

Calls for Justice for Activists in Defense of Land and Territories

The increasing number of cases of violence against women activists and their arrests prompted JASS Southeast Asia to focus its annual One Day, One Voice regional campaign during 16 Days of Activism on these women. This year’s theme, “Justice for All Women Human Rights Defenders” honoured all the courageous women activists in prison through a series of art performances, media events, peace marches, dialogues, bazaars, film screenings, and lantern lightings in Cambodia, Indonesia, Myanmar, Thailand, Timor L’este and the Philippines.

Eva was one of the activists that JASS Southeast Asia and FAMM spotlighted and mobilized global support for. Eva was released on Dec. 19, while the other two farmers were released on bail. JASS and FAMM-Indonesia joined thousands of activists to welcome her. Eva’s release is living proof that with collective action, everything is possible.

This presidential pardon has given hope to other activists across Southeast Asia—that all women human rights defenders—those who have been jailed, forcibly disappeared, and killed—be given justice. In the meantime women’s rights groups will continue to organize and spotlight women activists who are being targeted for their justice work. Eva will continue to fight for the charges against the other two farmers to be dropped and for the rest of the 140 farmers and human rights activists, including agrarian activists, who are also in jail—to be released. As Eva wrote in a poem, “You silenced me with prison…but you can’t silence my soul, my struggle, my voice.”

This is an update by WHRDIC member JASS and also appeared at Protection International: http://protectionline.org/2015/01/07/human-rights-honored-after-indonesian-activist-eva-bande-is-released-from-prison/