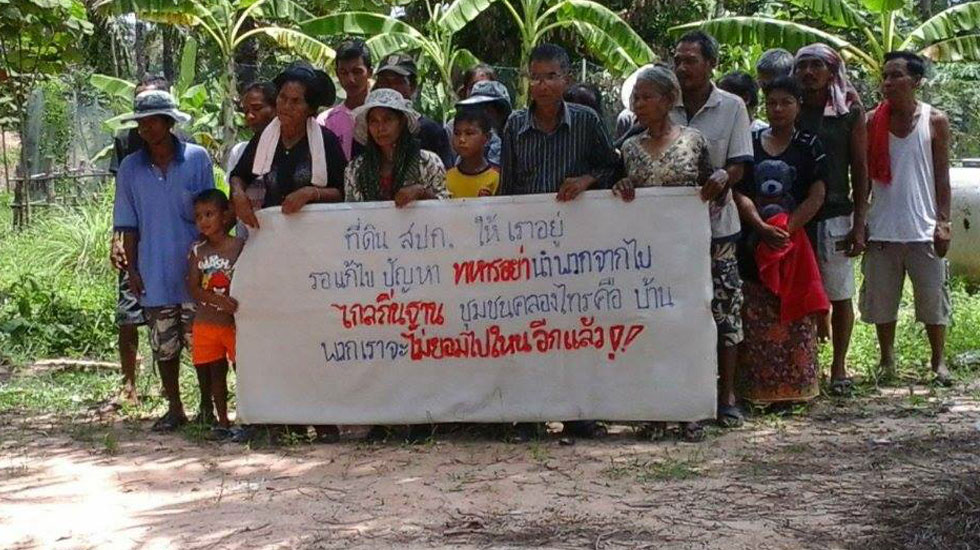 From Protection International: Klong Sai Pattana community gets temporary reprieve and assurance from Governor Chatpong Chatputi that their right to stay on their land will not be violated or threatened.

On 2 October, the Surat Thani provincial governor, Chatpong Chatputi, who is also the head of Provincial Internal Security Operations Command (ISOC) had a meeting with representatives from Klong Sai Pattana community and  SPFT. It has been agreed that:

This is a temporary reprieve for the community, but they hope that all duty bearers and those concerned about human rights and justice will continue to monitor their situation until this matter is finally resolved.

According to Frontline Defenders and Protection International,  community members of the Khlong Sai Pattana in Chaiburi Distrit have been intimidated to leave their homes by a group of eight men, including two local policemen in uniform, one military office in uniform, two members of the local mafia group and three unidentified men. This intimidation is part of an ongoing campaign of harassment and violence since 2009, including the deaths of women human rights defenders Ms Montha Chukaew and Ms Pranee Boonrat who were shot and killed in 2012.

The Khlong Sai Pattana Community states that it has a legitimate right to remain on its land, according to Thailand’s Agricultural Land Reform Office (ALRO) following a Resolution that was issued during the meeting of the ‘Committee to Solve Problems of the Land Reform Network of Thailand’ on 11 March 2009 in the Thai Parliament. The peasant community states that there has been an attempt by the Oil Palm plantation to sell its land.

Although land rights have been given to the Khlong Sai Pattana community, a large area of this land is still being illegally occupied by oil palm plantations over the past thirty years. The Agricultural Land Reform Office filed a civil law suit against the Jew Kung Juy Development Co. on behalf of the Khlong Sai Pattana community in order to evict the company from the community’s lands. The Court of First Instance and the Appeals Court upheld the civil law suit and ruled to evict the company. The case is now being appealed before the Supreme Court.

On 16 August 2014, two local mafia members brought fifty soldiers to carry out searches of eight houses belonging to members of the Khlong Sai Pattana Community. Those searches were carried out without any court warrant.

One Comment on “UPDATE: Thai defenders get temporary reprieve”