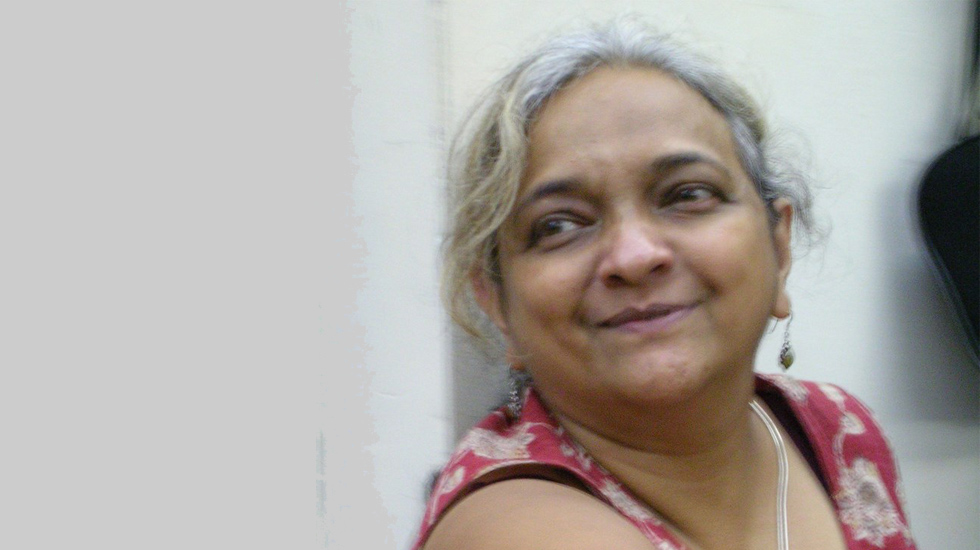 Is it really a whole year since we lost Sunila Abeysekera? She remains such a strong presence in the global feminist movements, a shining light and inspiration for all of us. Feminist activist, women’s rights and human rights activist, peace builder since the early 1970s, she is remembered and celebrated by countless people whose lives she touched.

Sunila was awarded the UN Human Rights Prize in 1998 for her tireless defence of human rights and for her peace-building efforts in her home country of Sri Lanka. Her much deserved international acclaim did not keep Sunila from continuing her activism in grassroots feminist initiatives. Sunila was first and foremost a feminist activist, an organizer and a catalyst in local, national, regional and global feminist and other social movements.

From the very beginning of her activism, Sunila was aware or the importance of information and communication in empowering women. She was a founding member of the Women and Media Collective in Colombo, Sri Lanka and founder of INFORM Human Rights Documentation Centre.

The story of Sunila’s early activism and emergence as a feminist is a part of the legacy she left to all of us. It also makes for fascinating reading: In “We were Feminist First” Kumudini Samuel writes about “Sunila’s contribution to catalyzing the activism of the nascent feminist/women’s movement of the early 1980s and the feminist theorizing she encouraged to underpin this activism.”

Sunila was a consummate networker. She brought feminist activists together. She participated in and contributed to so many women’s organisations. Isis International is one of them. She had a long and active association with Isis International and was a member of the Isis International Board of Trustees from 1998 – 2001. She was also a good friend, one of those with whom you could take up where you left off even after a long absence.

“Sunila was a consummate networker. She brought feminist activists together.”

Sunila wrote for Isis International many times over the years. We would like to share with you some of her writings:

In “Voices of Women: Media Alternatives in Sri Lanka” (1984), Sunila presciently wrote “the development of alternative forms of communication is a must for the growth of the women’s movement”. The publication in which it appeared was itself an epitome of alternative communication in its time. It was a collaborative action by three feminist organizations: Isis International, the Pacific and Asian Women’ Forum network (PAWF) and the newly-founded feminist publisher Kali for Women. The publication, Isis International Journal “Women and Media: Analysis, Alternatives and Action” was edited by Kamla Bhasin and Bina Agarwal with contributions from feminist organizations in Bangladesh, India, Malaysia, Pakistan and Sri Lanka. It was printed in India by Kali for Women.

Sunila’s life-long work as a peace activist was built on a deep understanding of the complex situation of the long civil war in Sri Lanka and its effects on women of different ethnic backgrounds, both as victims and as protagonists and peace builders. Her analysis “Women and Peace in Sri Lanka” was published in Isis International’s journal “Women in Action” (WIA 3:1999).

In “Are You Proud Being You? A Discussion on Racism, Prejudice, Discrimination and Women” (WIA September 2001) Sunila wrote: “In May 2000, at the Isis office in Manila, we began a conversation about ourselves and our feelings about all the different expressions of identity and identity-based political formations that we were experiencing throughout Asia. We wanted to become more aware of the issues at stake as we moved into different forms of involvement and activism around the World Conference Against Racism (WCAR) which is due to be held in South Africa in 2001. At the same time, it was clear that achieving a more sophisticated understanding of these complex issues would help us in the work we do around women in conflict situations, who are often caught between their identities as individuals and as members of tribes and communities…”

Her article on “Social Movements, Feminist Movements and the State: A Regional Perspective” is placed within the wider context of the global feminist movements. (WIA 2004/2 Examining Feminist and Social Movements)

During a rare free moment, at Sunila’s home in Colombo, Sri Lanka in 2004, Sunila Abeysekera and Marilee Karl sat down together to reflect on concerns about gender mainstreaming in the women’s movement. The result was the article “Gender Mainstreaming: An Obsolete Concept?: A Conversation between Two Long-Time Feminist Activists”, published in Women in Action (WIA 2004/2). Ten years later, it is still very relevant.

This represents just a very tiny sample of Sunila’s enormous contributions to global feminist and social movements and the many other organisations she with which she worked. Her impact lives on in the hearts and work of so many. We love you, Sunila!

This post originally appeared at Isis International and has been re-published with permission.

Marilee Karl co-founded Isis International in 1974 and is an honorary member of the Board of Trustees.